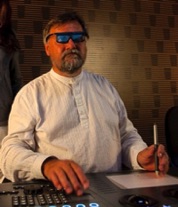 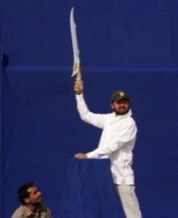 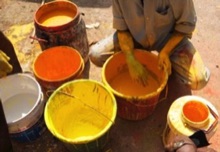 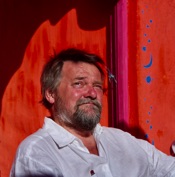 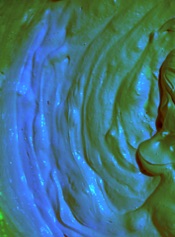 In a relatively frequent number of my past experiences as a visual effects supervisor there were times when I specified green or blue screens for visual effects work. As it happened, in some of my less fortunate production experiences, (not to be confused with the ones shown in these photos) in the trucks supplying lighting and grip materials, battle-worn 4 x 4's or 6 x 6's, usually with thick join-lines, seemingly eternal creases, and made of cloth referred to as blue or green, when the difference of color was apparent enough to distinguish which of the two colours we were discussing, were presented to me to be used on set.

These heavy, thick, unwieldy blue and green screens, often totally impregnated with dust and dirt, sometimes also sported tell-tale tyre marks or horse-shoe signs, illustrating graphically that they had also spent some of their long lives lying down, and not just standing up on sets.

Mind you, getting them to “stand up” often proved to become a fairly herculean task in itself, even though one would have thought that the impregnated dirt and mud would have helped in this, but, alas, even though fairly visible, these were invariably not enough to stiffen them sufficiently for the task.

In some notable occasions I remember as many as a dozen grips becoming actively employed tying numerous ropes, re-adjusting aluminium frames, giving the impression to the casual observer of what could seem to be a fairly complex military exercise underway; this was often followed by a further, and even more dynamic exercise in carefully positioning this "ensemble" of cloth and aluminium frames upright.

Because, indeed the time eventually came when it became necessary to raise them vertically into the air. This was an action that sometimes proved quite hazardous in itself as the combined size and non-porosity of the so called "scrims" meant that they were basically similar to large sails, and, as such, possess innately the tendency to behave rather like the real ones; they want to go where the wind would like to take them - normally downwind, in a similar fashion to Spinnakers, unless otherwise set to take the wind broadside or taut to the wind - eventualities that require carefully contrived settings and generous counterweights not that dissimilar to requirements in sailing - or, if you like, the grip's equivalent to a heavy counterweight to mimic a yacht's lead keel.

Quite apart from manoeuvring all into place, a masterpiece of logistics if there ever was one, and sometimes also sublime choreography to watch, albeit nearly always without appropriate accompanying music - a dynamic combination of sandbags, ropes, and pretty much all of the available grips could often find themselves hanging on to the scrims - seemingly for dear life as the wind built up - which, obeying inevitably Murphy’s law and all of it’s intriguing cinematographic variants, it often did.

This combined effort was certainly to be appreciated, at least as a powerful visual scene that happened in front of our very eyes, and, on the occasions when live sound was being recorded, the whole “ballet” somehow even managed to take place in almost total silence, as the grips made herculean efforts to be as quiet as possible, while straining to hold the scrims in their designated positions and tip-toing on their feet.

What a pity these types of scenes are not usually shot on film; although to be truthful sometimes they indeed can be, if all the grips and scrims are blown into frame by a particularly strong gust of wind during a take. It strikes me that a collection of such shots could indeed make an interesting ballet once edited together; a sort of “blue screen suite”, taking a cue from Tchaikovsky’s famed “Nutcracker Suite”.

As a conscientious visual effects supervisor, I couldn’t help feeling sorry for the enormous effort of the many involved; all seemingly at the mercy of my whims together with the vagaries of the wind, due to what certainly started as an innocent plan to put green or blue behind both animal and human talents.

And there we go; sadly, the reality of it all was that we nearly always had aluminium bars in the bottom of the frame leaving legs, paws or shoes to be rotoscoped out painstakingly in post, and this often applied to the left, right, and top of frame as well; thereby illustrating graphically the same concept as a double bed with a small single bed sheet pulled left and right by two contending sleepers wishing to remain covered, or underlining the fact that maybe a 6 x 6 isn’t big enough for every blue or green screen shot in the world of cinematography.

To make matters worse, the actual composited results in these cases are not usually up to par because of the fact that the green or blue cloth continuously changes color and intensity while moving in the wind, presenting a sometimes semi-transparent rear to the backlight or sun, so that it could take many hours of work in post to patiently manually rotoscope out the parts not covered at all by the screens themselves.

All of this to the extent that a conscientious visual effects supervisor would, in the face of the sum of these issues, ask themselves whether this could be considered a “to be or nor to be” situation, in the sense of whether it is wise to actually use a blue or green screen at all, or could it have been more efficient to have shot on the actual background and subsequently rotoscoped the foreground persons out?

And the answer when using the wrong materials can sometimes disarmingly prove to be “maybe”, especially if empty plates are shot and contrast or color with depth can aid and abet the subtle arts of difference and luminance matting, or many people working for hours on set.

In essence, whether 'tis nobler in the mind to suffer the slings and arrows of outrageous fortune, or to take arms against a sea of troubles, as Shakespeare aptly put it, the aforementioned “green” and “blue” screens, far more similar to interesting archeological specimens - in as much as the tell-tale signs and marks on the screens can probably tell us which films they have worked on historically, are what some production staff consider to be the right material for the job; they will uncannily refer to these blue or green screens as "this is what every other visual effects supervisor has always used - if you want something else, it's you who don't understand how to “do” green screens - nobody else has ever complained about this before - we've been using these for years - and if there are any additional expenses for your requirements, then these will have to come from the post budget, not the production budget, or words to that effect when not more devastating - and, of course, sometimes, there is that too!

Why use scientifically designed materials to reflect less green and blue into the subjects, create more color separation, reduce color pollution on skin tones, generate even coloured backgrounds for effective and quality compositing, and worry about how to make smoke, water and atmospheric effects separable from the backing?

I guess that the reader may have thought that this little piece on blue and green screens had come to a conclusion, especially seeing me “crucified” with a blue screen in Amit Ashar’s clever and, believe it or not, spontaneous photo as I walked towards him flapping my arms during the shooting of a major Indian film in Rajasthan, but, let it be known, I have also experienced some interesting “paint jobs” in my career too, and not just in the Indian Holi festival.

There are also certain mitigating circumstances that suggest using painted surfaces and not cloth to give the desired blue or green screen effect. As with specialised cloths, there are indeed specialised paints made specifically for this.

These paints, rather like the cloths, are specially made to help in generating accurate mattes for post production compositing tasks. Also, rather like specialised cloths, the paints, due to their metallic pigment components made to reflect a narrow spectrum of light frequencies, can help to improve compositing subsequently, and are significantly more expensive than the kind of paint that we’d normally use to re-decorate our houses or apartments with.

However, and since these paints do cost more than house paints due to their metallic components, I have observed an interesting phenomenon related to this, again, in the cases of some of the less fortunate productions that I have worked on (or, should I say producers).

Every time I am actually asked which kind of paint I think would be ideal for the job in mind, I specify these specialised paints. Following which, there follows a rush around the City in question to find the single can that was once ordered and had actually been bought from the real manufacturer or importer to show me. This was often done casually, as if it was what the particular production had actually decided to supply without me even asking for it (clever, you might think).

This, often seen, but rarely used, half empty can of paint, is then brought in front of my eyes so that I can see that we are talking about the Full Monty so to speak; while, in reality, in the meantime, cheap house paints have been mixed with standard yellow, green, black and white house paints behind the scenes, so as to make a mixture that looks as close as possible to the original color, albeit somewhat duller. These are “matched” with the still visible dried original paint on the can that someone had actually “invested in” many years before.

The amusing thing about this is that I couldn’t help but recognise that same original can over the course of many years and different productions - did somebody actually rent it? Does it go from one Country to another? Is there a pattern in these sightings?