some simple proposals    by David Bush

written for the magazine MILLECANALI for September 2007 edition, and translated from the original Italian by DeepL.

An illustrious figure from the world of Italian cinema who, although not born in Italy, loves our country very much, illustrates some of his interesting ideas for stimulating and revitalizing our audiovisual production.

I have read some of the considerations that the political world is making regarding the new initiatives to stimulate film production in Italy; I am convinced that they will certainly be useful and stimulating for the sector (which desperately needs them, judging by the small number of films produced in recent years) and I thank everyone for the efforts being made; let's hope that the various souls of the majority and the opposition can come to an agreement, so that the initiatives become truly effective and efficient.

However, as I listened to the various proposals, I realized that they revolve almost exclusively around the problems of authors, distributors and producers. Instead, I believe that the dialogue should be broadened to include more personalities, including, for example, the technical industries among the interlocutors. However, I know that the technical industries have also made their voices heard and this time I would like to add mine to theirs.

a trend that must be reversed

Without prejudice to the undoubted usefulness of greater investment and greater availability of resources, as well as, hopefully, a new and more modern system for redistributing them, I believe that there is also an additional opportunity that could generate more work, more market and growth in the sector, if only effective measures were adopted to stimulate foreign productions to choose Italy for their productions.

Let's tap into our beautiful potential!

David Bush, through our magazine, launches a cry of pain, but with several constructive proposals, on the state of the Italian cinema and audiovisual production industry.

In my opinion, Italy possesses all the potential needed to climb the heights of the international market: studios, top-level workers, opportunities for the creative development of production (including foreign production) of films, TV shows and advertising, but, above all, it has the country's structural and therefore unrepeatable peculiarities, so to speak; I am referring to the incredible variety of splendid locations it offers, as well as the presence, not indifferent, of a nucleus of personalities of an artistic level that are difficult to find elsewhere, especially in such a composite and complete manner.

I've been fortunate enough to have been involved in many film productions as a visual effects supervisor, and in the last decade I've noticed how many of the films I've been involved in have increasingly moved abroad. The main reasons have always been the same, although in different proportions, case by case: less expensive set construction, cheaper labor, and specific incentives or tax credits offered to producers from time to time.

On the other hand, I have frequently heard from foreign producers that the requirement of a five-day work week - currently the practice in Rome - implies an increase in costs, due to the extra weeks needed for filming (perhaps it will be appropriate to revise this requirement in order to regain competitive spaces with foreign countries, where they usually shoot six days a week, recuperating the rest between one film and another).

The advantages of public incentives for cinema

However, the fact emerges with worrying clarity: more and more the preferred destinations are Bulgaria, Serbia, Slovakia, Czech Republic, Lithuania and, in general, the countries of Eastern Europe, to the point that in Romania, according to the economic value of production, at present more films are produced than in Italy.

The reasons for this sad condition (for Italy) are obvious and disarmingly simple: in a sector that has known globalization beforehand, in which productions have chosen as privileged destinations those countries able to offer increasingly competitive solutions in the form of incentives, tax credits, refunds to productions or, again, interventions by state-owned companies with convenient budgets, proposing, in short, productive stimuli of various kinds, the opportunities seized by Italy have increasingly weakened. At the same time, another, decisive, element contributing to the weakening of the Italian productive capacity is the tendency of the same national productions to follow the shift of the productive axis towards foreign countries (moreover, for the same reasons).

In order to illustrate what other countries are doing to obtain more and more productions at home, I will illustrate some situations that I happened to know; a first glaring example is given by the case of the film "The Lord of the Rings", shot and post-produced in New Zealand.

At first, the producers, attracted by the presence of locations particularly suitable for the project (which, despite their undoubtedly spectacular nature, could also be found in other countries), obtained from the New Zealand government a 10% refund of the amount spent in New Zealand in exchange for the enormous workload that the project would have brought to the country; then, when the negotiations raised the possibility of a second film to be shot locally, the government's offer, in competition with other countries, increased from 10 to 20%. When, finally, the decision was made to make the entire trilogy, the offer increased again, reaching 30%.

The data that emerged from this experiment proved to be sensational and what might have seemed to be an example of statism as an end in itself has, instead, produced excellent results: New Zealand's GDP has grown by + 0.5% thanks to the many hundreds of millions of dollars invested in the territory and the associated induced activities; in fact, an industry sector has been created (including the field of post-production) that, until then, did not exist there, and which still maintains high working and employment standards.

And this without counting the resounding fallout that all this has had in the tourism sector: a mammoth, incredible advertising spot for the country worth hundreds of millions of dollars. At present, any production that chooses New Zealand knows that it can count on a 20% refund on what it spends in the territory; moreover, investors residing in the territory have facilities such that they can deduct 100% of the costs incurred for production from their taxes: this has led not only to the growth of national production, but also to the presence of new high-income taxpayers in the country.

But New Zealand is not the only case of foresight and productivity: the Australian government has gone so far as to offer 40% restitution (of what is spent locally) to productions that choose to shoot and/or place post-production in the territory; I myself am currently involved in a project that could also become an Australia-Italy co-production and which, however, if our country does not offer incentives of any kind, will fatally see the choice of other more motivated production partners (such as Bulgaria and Romania), with a loss of fifteen million euros in production and services for Italy. Moreover, the same producers have a "slate" of five films with the same characteristics for a total of about 100 million euros that can be spent in Italy, but nothing will be realized here, if there are no incentives at least equal to the opportunities offered abroad.

I hear talk of facilitations on VAT recovery (even if, perhaps, only in Lazio), when not due, in reasonable times, quantified, as far as I have heard, in "only three months", as opposed to the three years previously necessary! Damn it, if a tourist can recover VAT as he leaves the country, why should a film company be subjected to such bourbon rules?

Of course, three months is better than three years, but it doesn't seem to me a sign of great bureaucratic efficiency!

the reasons for a proposal

With New Zealand and Australia, I have cited only the most striking cases of absolutely successful production experiences, but others could be cited, no less valid, such as those made in my native England, based on the tax credit system; England has always had a pro-active policy to attract productions to its country and the UK Film Council has recently appointed Colin Brown (a very smart ex-colleague, coming from various experiences in the world of post-production) as British Film Commissioner; his role is to attract foreign productions to Great Britain as much as possible and, knowing him, he will do it with great effectiveness. I thus note that the big production of the new James Bond will return to Shepperton, instead of Prague, a sign that he, in all probability, is already at work. There are also the opportunities, certainly not negligible, of the German brand (in Germany, a refund equal to 20% of what is spent in the territory is offered), or the new ones under discussion in the Czech Republic (there is talk, here too, of a 20% refund in order to maintain a certain local competitiveness).

In short, I see more and more projects moving away from Italy and with them the possibility of competing with the emerging countries of the European Community and North Africa, also in terms of pure construction and personnel costs, given that by now foreign costs are on average in the proportion of one third compared to ours. I couldn't help but notice a certain decline in the use of Italian studios for film productions in general, which is why I have been arguing for some time now the need to invest in new technologies, to create new reasons for supplying the international market, even if incentives would already help quite a bit.

I understand that talking about incentives, refunds and the like in a country that is already struggling to restore its public finances may seem like a risky proposal; however, I believe that the examples of the countries mentioned clearly show how these investments are more than fruitful and how the adoption of these financial instruments in Italy would contribute greatly to restarting the Italian production system, at different levels.

here are the advantages...

In brief, the positive economic effects of the proposed system can be summarized in a few essential points:

- full employment within the sector. Let's not forget the loss of "skills" suffered due to the forced "retirement" of many professionals, deprived of job opportunities;

- development and growth of national technical industries, with consequent opportunities on international markets and increased competitiveness; - very high added value due to the advertising spin-offs on the tourism sector (with the related market dynamics related to Made in Italy, etc.)

- growth in tax revenues and healthy decrease in evasion, due to the increase in reporting and invoicing by companies; - consequent overall economic development of the country.

A simple way to recognize possible incentives could be, for example, to recognize a discount in the invoice to Italian companies of audiovisual services (which to be competitive, given the other foreign offers, should be around 30%, in my opinion), allowing the same companies the opportunity to download these figures from the contributions to be paid to the State: this would generate not only a net decrease in the weight of tax evasion on the economy, but would also constitute a significant increase in employment and production for the Italian audiovisual industry, in the event, above all, that these incentives are also extended to the television drama market and the advertising sector. Basically, a 30% discount for all those who choose Italy for their audiovisual productions.

A simple formula: zero cost, higher revenues, full employment and, moreover, publicity for the country. Those who, like me, live and work in Italy and love this country cannot but feel with deep pain the decline and abandonment towards which the audiovisual production sector seems to be heading: it is necessary to remedy it and it is necessary to do it quickly and efficiently, in order to avoid that this splendid and unique human, artistic, natural and cultural heritage is slowly but surely lost.

Written for Millecanali magazine in September 2007. 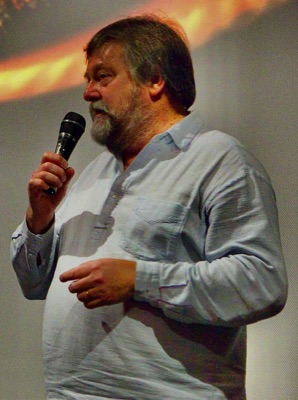